Sights and Sounds: State of the Lehigh Valley, January 13th

Check out RenewLV’s podcast of the “State of the Lehigh Valley” event on our multimedia page or on iTunes!

Here are some pictures from Iacocca Hall done by photographer Matt Blum of Lightly-Salted Productions: 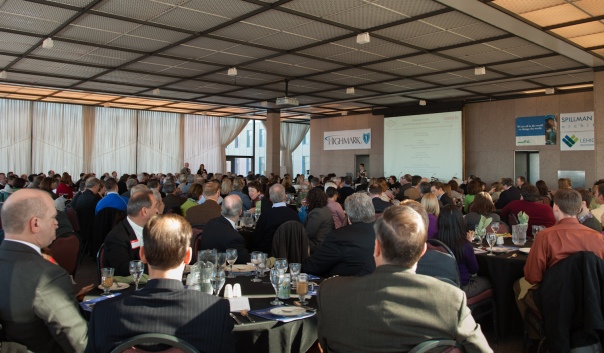 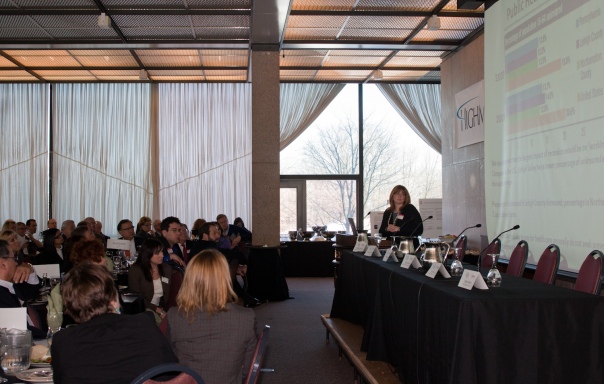 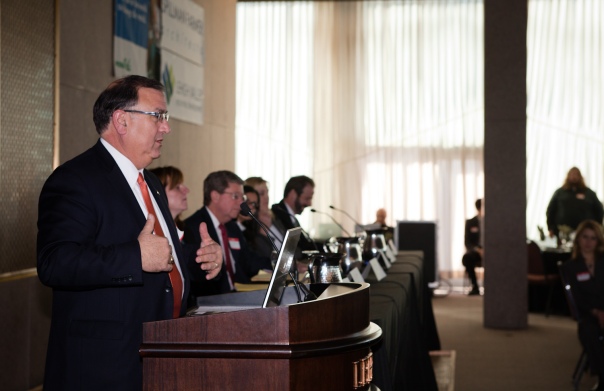 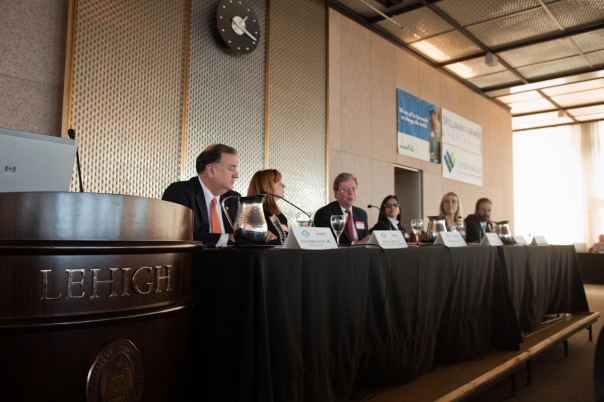 What Are We Fighting For? #MuniCon

The New York Times published an excellent article (New Jersey’s Tiniest Towns Fight Push to Merge) on the push for municipal consolidation, particularly in New Jersey, but more generally, a push that is catching on nation-wide. In New Jersey, former Governor Jon Corzine signed a law in 2007 that would allow residents of towns to petition in order to start the consolidation process for their municipality. But almost no towns have consolidated since the bill passed — and the small town of Teterboro is now fighting against this.

At 1.1 square miles, this town is smaller than Central Park — smaller even than Teterboro Airport, which spills past its borders. It has no schools, no police or fire department, far more aircraft than residents, and a bone to pick with the Census Bureau.The bureau estimates Teterboro is home to 17 people, making it the smallest municipality in New Jersey. But locals say the true population is at least 50, maybe 60.

Either way, many people wonder why it is a town at all, and a bill before the State Legislature would abolish Teterboro and split the pieces among its neighbors. That bill has stalled, but the idea is not likely to go away. And many other places across the state are ripe for the same treatment.

The town’s manager Paul Busch — who, by the way, earns a salary of $130,000/year — states that claims about savings from consolidation are unsubstantiated. But it’s a little hard to figure out how Mr. Busch can make that statement without a comprehensive long-term study that examines the costs and benefits of consolidating municipalities.

All in all, the pushback on consolidation — at least in New Jersey (but who are we kidding? The pushback is strong everywhere) — seems to be mostly political. As the Times reports, “The idea of combining entities often meets fierce resistance: it can cost local officials their jobs or political power, and many residents see it as a loss of autonomy or identity.”

So what are your thoughts on municipal consolidation? Do we really need these little fiefdoms? What are we fighting for? And with a conservative estimate of 60 people in the town of Teterboro, is each resident paying over $2,000 for just Mr. Busch’s salary (assuming each of those 60 people is a taxpayer — which I doubt)?

The 19,000-square-foot site is one of the largest, if not the largest, handicap-accessible playground in the region. It features equipment for all children and has a rubberized floor that helps soften trips and falls as well as accommodate wheelchairs.

“This is a great day for Allentown,” said Greg Weitzel, head of the city’s Parks and Recreation Department. “We built this playground so all of our youth can be challenged and play outdoors in a safe and comfortable atmosphere.”

This is an exciting development and a great new place to visit in the region!

Saucon Valley School District will soon be home to a new environmental education center. Well, not soon-soon, but plans are underway by the Saucon Valley Foundation for Education Innovation. The Express Times reports:

The nonprofit foundation, organized by parents, community and business leaders, plans to hire the LandConcepts Group to create a $8,950 master plan for the center along the creek adjacent to Polk Valley Road.

Initial lower-cost ideas being floated for the site include student-built birdhouses, tree identification markers, a garden or a weather station with a rain gauge that could be used in the school.

Exciting project and a great new addition to the Lehigh Valley.

The SteelStacks project is a step closer to reaching its goal for its capital campaign as it just received a prestigious grant from the national Kresge Foundation. But the grant comes with one catch: the funding must be matched.

“This historic award is a national endorsement of ArtsQuest and its work to revitalize and stimulate communities with arts, culture and educational experiences,” said Diane Dalto, chair of the Pennsylvania Council on the Arts.

“Imagine coming up with $26 million in this economy,” ArtsQuest President Jeff Parks said in a prepared statement thanking the foundation for the grant. “It’s nothing short of miraculous.”

While Jeff Parks considers it close to a miracle, for me, it’s fairly clear why this project has had so much success in raising the needed funds — it’s going to further reinvigorate the entire Lehigh Valley community (new music venues, new gathering place) as well as effectively redevelop a brownfield site. Can’t wait to read more about this success story.

The three co-chairs of Building America’s Future — CA Governor Schwarzenegger, PA Governor Rendell, and New York City Mayor Bloomberg — published their thoughts on improving our nation’s infrastructure in the most recent Politico. The three leaders commented on the newly-released report by the Treasury Department and Council of Economic Advisers on the economic benefits of transportation investments.

Whenever we travel to other nations to promote U.S. industry and enterprise – like Gov. Schwarzenegger’s recent trip to Asia – we see the tremendous progress being made overseas. We worry that our nation could fall behind the rest of the world if we don’t start doing more to invest in our future.

We owe it to our children – and our country – to build infrastructure that could allow us to remain the world’s economic superpower in the 21st century. Equally important, large infrastructure projects would put many Americans to work during this time of high unemployment.

The post ends with an urging to continue with discussions around a National Infrastructure Bank (NIB), which was the focus of yesterday’s Crossroads post. The NIB would provide the necessary dedicated funding for our country’s infrastructure (and would provide the means to fund new, much needed public transit projects — such as high-speed rail).

To learn more about how federal transportation policy affects local regions such as the Lehigh Valley, visit our Sustainable Transportation Initiative web page.

Is the Key to Our Energy Crisis in Silicon Valley?

Well, maybe not the ENTIRE key, but surely some solutions to our energy and transportation needs will come out of Silicon Valley in the next decade. Many entrepreneurs are flocking to the region seeking funding from venture capital companies. NPR reports:

“We think EVs [electric vehicles] offer so many advantages in terms of environment, economy and security that we thought we should put some of our investor dollars into those kinds of companies,” says Dan Reicher, the director of Google’s climate change and energy initiatives.

Google has EV charging docks on its sprawling campus in Mountain View, Calif.

“We’ve built a fleet of plug-in cars,” Reicher says. “These are Toyota Priuses and we converted them after market.”

Google has essentially turned the hybrid Prius into a plug-in so that employees can charge their cars at work. It’s this kind of garage-startup mentality that has given Silicon Valley its innovator reputation.

Sustainable transportation and energy solutions should bring an entirely new economy to the United States, one that will allow the nation to compete better in the global economy. Maybe we can bring some of this to the Lehigh Valley.

Last week’s news that New Jersey Governor Chris Christie was killing the ARC Tunnel rail project made the sustainable transportation blogosphere collectively boo and hiss — so much that US Transportation Secretary Ray LaHood hopped on the next train to Trenton to meet with the Guv. Sec. LaHood was quoted in the Record on October 8th:

“Governor Christie and I had a good discussion this afternoon, during which I presented a number of options for continuing the ARC tunnel project,” LaHood said in a statement issued after that meeting.

“We agreed to put together a small working group from the U.S. Department of Transportation and the office of NJ Transit Executive Director Jim Weinstein that will review these options and provide a report to Governor Christie within two weeks.”

If you live in New Jersey, I urge you to contact the Governor and let him know that this project is a much-needed connection.

PennDOT’s Pennsylvania Community Transportation Initiative is in full swing once again, though the pot of money is much smaller this time around. As some of you may recall (especially if you attended RenewLV’s brown-bag session last year on the topic), PCTI is the effort to fund community-oriented transportation projects throughout the Commonwealth. PCTI is part of PennDOT’s Smart Transportation campaign that aims to link land-use planning with innovative and sustainable transportation solutions. Last year, four Lehigh Valley communities received funding: Allentown, Bethlehem, Easton, and Hellertown (listen to RenewLV’s podcast of the Community and Transportation brown-bag session and see the Governor’s press release for more information).

This year, 16 Lehigh Valley applications were submitted, reports the Express-Times. Easton is once again applying, this time with the project of updating Centre Square. Sarah Cassi writes:

Panto said the goal is to make traffic “smoother and calmer,” according to information from the Lehigh Valley Planning Commission revealed at its meeting Monday in Hanover Township, Lehigh County.

The city has applied for a $1.5 million grant from the Pennsylvania Community Transportation Initiative program to help with the work.

The PCTI fund totals only $24 million this time around, less than half of what it was last time around ($60 million). Other local projects that are vying for money are Allentown’s Hamilton Street project and the continued work on the Bethlehem Greenway (this time connecting it to Hellertown).

Lehigh Valley residents: cross your fingers that we see a large chunk of that money come our way. Given our success last time around, I have good feelings for this year.

Once again, listen to our Community and Transportation podcast on this topic. It includes comments from last year’s project representatives, as well as an intro to Smart Transportation by PennDOT spokesman Ron Young.

With how the recession seems to affect every aspect of life, it seems almost trite to talk about economic stresses. But hey, one more time can’t hurt.

The WSJ published an article yesterday on the dilemmas faced by municipalities when considering bankruptcy. While deciding whether or not to file is already a complicated process for individuals or businesses, for local governments the outcome is almost entirely unknown. David Wessel writes:

There is no obvious mechanism for state and local governments to resolve the coming collision between competing claims of taxpayers, retirees (both current and future) and bondholders.

A bit of history: Amid collapsing municipal finances in the Depression—in Detroit, 36% of the taxes were delinquent in 1932 and 76% of tax revenue that arrived went to debt service—Congress allowed cities and towns, municipal utilities and the like (though not states) to go into bankruptcy.

Several Supreme Court decisions and congressional amendments later, the threshold for a municipal filing is much higher than for companies, judges’ role more limited and the process largely untested. Bridgeport, Conn., was blocked from filing under Chapter 9 in 1991 because a federal court said it wasn’t truly “insolvent,” a test companies don’t have to meet.

The author concedes that there are few instances of local governments filing for bankruptcy, and that most experts do not expect to see an increase. But this does raise the question of what options cash-strapped local governments have to effectively manage their debt while still continuing to provide services to their constituents.

Certainly bankruptcy isn’t a preferable option, but when a municipality has to pay off its debt burden for, say, a construction project that is years behind schedule and far over budget, what services can it afford to cut? How can it increase revenue without placing a massive tax burden on residents? Regional consolidation would be one step to help make local governments more financially secure and cut their expenditures.